President Akufo-Addo has been named among the 100 most influential people in Africa according to a London-based magazine, New African, ABC News can report

In it’s December edition of the annual 100 Most Influential Africans (MIA) listing, the Magazine indicated that the rating is done after a review of the “major events and developments across the continent” while highlighting the achievements of these individuals in their various countries.

Apart from President Akufo-Addo, some other persons who made the list include Ethiopian Prime Minister, Abiy Ahmed, who won the 2019 Nobel Peace Prize this year, and Africa’s richest man Aliko Dangote.

According to New African Magazine, with regards to political leaders, the people chosen as the most influencial are those who put the interests of their citizens ahead of their own ambitions while running the economy.

“By and large, some political leaders, as well as those running continental institutions, put the interests of their people ahead of their own ambitions. It did not come as a surprise that Ethiopia’s Abiy Ahmed was awarded this year’s Nobel Peace Prize. We believe our listing reflects this aspect of the continent’s politics,” the magazine wrote.

The list is broken down into eight categories, of which the Business and Finance section leads with 28 entries, followed by The Arts and Culture, with 18 entries, and Politics and Public Office which has 15 entries.

Overall, Nigerians dominate this year’s list with 27 entries, followed by South Africa and Ghana, both with 9 entries. English speaking countries represented 65% of all entries, while at 42 entries, female representation is down from 50 achieved last year.

President Akufo-Addo in 2017 was named as one of the three most influential African leaders of 2017 with Rwandan President Paul Kagame and Guinean President Alpha Conde. 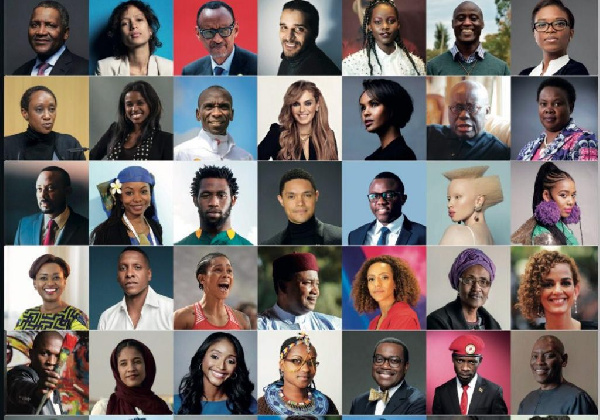 About Nana Kasa 785 Articles
Nana Kasa is a profilic blogger with 4 years of experience in the blogging industry in Ghana. Nana is passionate about social issues affecting the country. Giving talks is what Nana does at his leisure, want to contact me: nana@ghanatalks.net